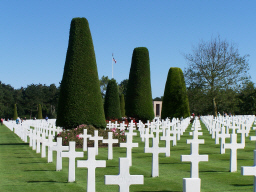 US Cementery and the coast from Normandie. We noth find Schwulst soldiers.

Army of the United States includes the following; volantry enlistments effective December 8 1941 and thwereafter. One year enlistments of Nationa Guardsman whose State enlistment expires while in the Federal Service. Officers appointed in de Army. Education Grammar school. Hi is married.

The attendance of president George W Bush third biggest American soldier cemetery of Europe in Margraten the Netherlands was a part of the commemoration ceremonies on to 60. Anniversary of the end of war. On that 26 hectares large cemetery Margraten are buried 8302 pleased soldiers from the USA and Canada, which are fallen to Germany with the march of the allied troops.

Into its speech Bush said: “I honors a generation, which furnished enormous victims, thus my generation in a free world to grow up could 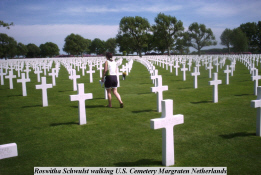 Robert Schwulst. Hi born 1925 Wisconsin Died March 1945 in Germany October 1944 Freeman article notes wounded in France and Earns Purple Heart. Died in WWII Article in Waukesha Freeman 1947 27 October. Schwulst joined the army 17 March 1943 and went overseas 27 April 17 1943 with Infantry N of the 78th Lightening division. Hi was killed while crossing the Rhine in Germany 16 March 1945. Survivors include four brothers and three sisters. The bodies (y) of Schwulst has (have) been interred in the Henri Chapelle temporary military cemetery in Belgium.